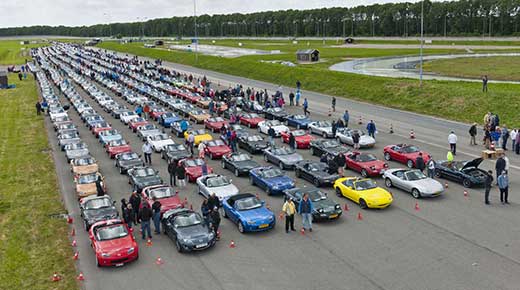 Fans of the Mazda MX5 have set a new world record by creating the largest parade of driving Mazdas ever.

A total of 683 examples of the famous Japanese two-set roadster gathered together at the 2013 MAX-5 event in Lelystadt, Holland to shatter the previous record of 459 Mazda MX5s set in Essen, Germany in 2010.

It’s difficult to know exactly what spec all 683 vehicles attending were in, but even if all were the most basic, original 115hp 1.6-litre models, that means a total of over 78,500hp was on show last weekend.

The record just goes to prove the appeal of Mazda’s superb sports car, and that even the original – now approaching 23 years old – is still a brilliantly agile two-seat proposition for those summer drives. 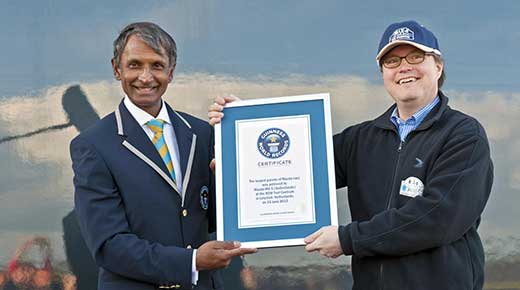 Even the early 1.6-litre cars and classic mk2 1.8 vehicles are still fast, with the crisp and revvy four-cylinder engine responding strongly. 0-62mph takes 8.1 seconds in mk1 cars, with the most modern Mazda MX5 completing the same 0-62mph sprint in a range best of 7.6 seconds.

Despite the impressive new world record, it’s a fraction of the total Mazda MX5s ever produced, with over 735,000 being sold worldwide over the car’s 23-year-life span.

It’s amazingly reliable, too, which is why the MX5 is destined to become a classic – prices are already shooting up, so bag yourself a sound used example now, and you could be in the money in a few years time.

Supporting the massive crowd of Mazdas were cars from the Mazda MAX-5 cup and a special three-rotor-engined Mazda, giving special demonstration runs on track.

Owners could also get a taste of the on-circuit action, with the race simulators available, replicating the banked track and Mazda’s new i-Activesense technology – a vehicle system which helps drivers recognise hazards and avoid or reduce the severity of an accident. 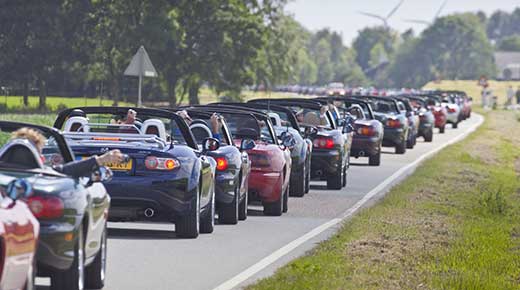 Under the i-Activesense umbrella sits Smart City Brake Support – a system that can sense an object in front of you, such as a pedestrian or slowing car, and actively apply the brakes to avoid or lessen the impacts of any potential incident – lane departure warning, adaptive headlight systems and rear vehicle monitoring.

Have you witnessed any of Mazda’s latest safety systems work? What did you think to their performance? Let us know below or on twitter @twwhiteandsons. Alternatively find us on Facebook.

Maybe you’re after a classic Mazda MX5, or have you owned one in the past? We want to hear what’s on your wish list or some classic stories from your time as an owner.