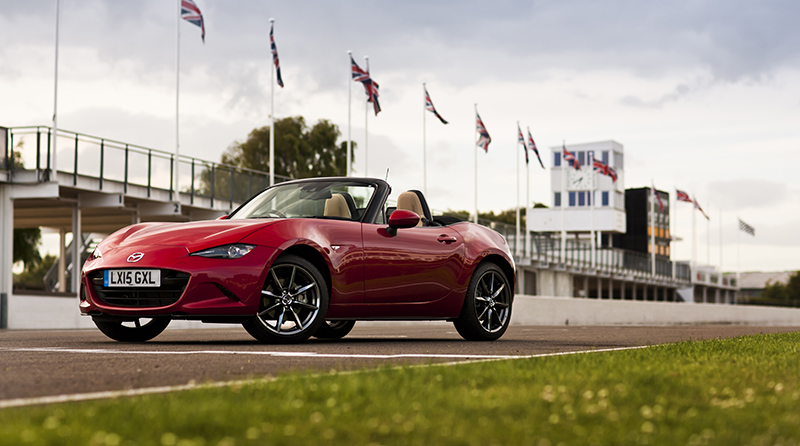 A History of the MX-5

To honour the prestigious evolution of the MX-5 model, we’ve taken a look back at the history of the MX-5, from its debut, to the evolving changes that have been made, keeping this classic car at the forefront of modern trends and technology of the motoring industry.

A History of the MX-5 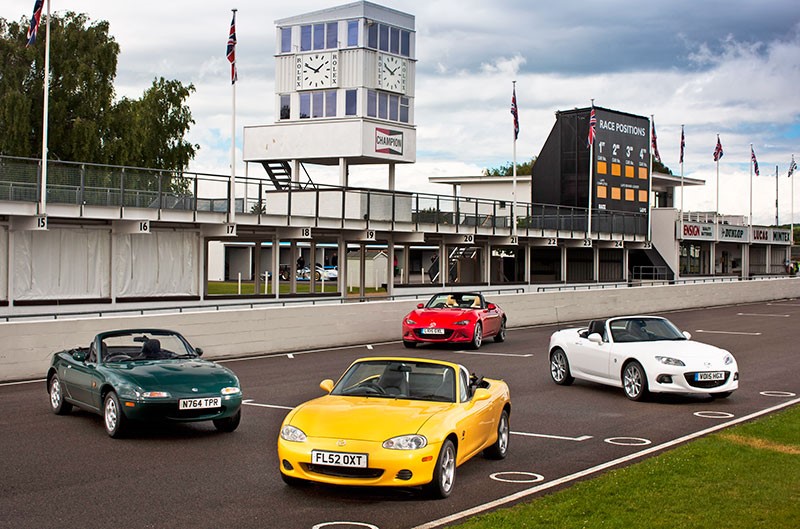 As one of the most affordable drivers’ cars on the market, the MX-5 has become a true legend in its own lifetime and it’s hard to believe that the original MX-5 is 27 years old, having been first launched in 1989 at the Chicago Auto Show. That makes the Mazda MX-5 older than Harry Potter actress Emma Watson, Tennis Star Caroline Wozniacki and Cricketing legend Joe Root. But whilst these young celebrities were crawling around and learning to talk, the MX-5 was already making headlines and breaking records.

After an American motor journalist lamented the loss of simple, bugs in the teeth, wind in the hair British sports cars such as the Triumph Spitfire and Lotus Elan in the late 1970s, a competition was launched between two Mazda design teams in Tokyo, Japan and California, USA. After several rounds of judging, Mazda selected the US design with a front-engine, rear wheel drive setup as the basis for the final model. It was at this point that Worthing, West Sussex based International Automotive Design got involved, to develop a working prototype known as the V705. It was this British company that developed the exterior and interior style for the MX-5 and built local prototypes ready for mass production in 1989. The MX-5 name was chosen as a condensed form of Mazda Experiment, project number 5, so really this was the “Mazda Mazda Experiment”

By February 1989, the MX-5 MK1 launched to the US and Canadian markets in soft top option, weighing just 980kg, less than a modern day Mini Cooper. Buyers had a 1.6 engine and a choice of either 5 speed manual or 4 speed automatic gearbox. Strangely enough, in Japan the MX-5 was not launched as a Mazda, instead being launched under the deluxe Eunos marque and named as a Roadster. There were deluxe features with the base model such as alloy wheels, power steering, electric windows and a stereo but had no air-conditioning to keep the price and weight down. Keen customers in the UK did receive some special models, with a special Limited Edition of 250 models in British racing green, tan leather interior and brass plaque as a nod to the classic British cars the Mazda was based upon. More luxurious and special editions followed, such as the Le Mans edition after their 787B became the first and only Japanese car to win the 24 Hours of Le Mans in 1991. The MX-5 won several awards of its own, including Wheel’s Magazine’s Car of the Year 1989, Sport’s Car International’s Best Sports Car of the 1990s and countless races including stock car, amateur and endurance cups. 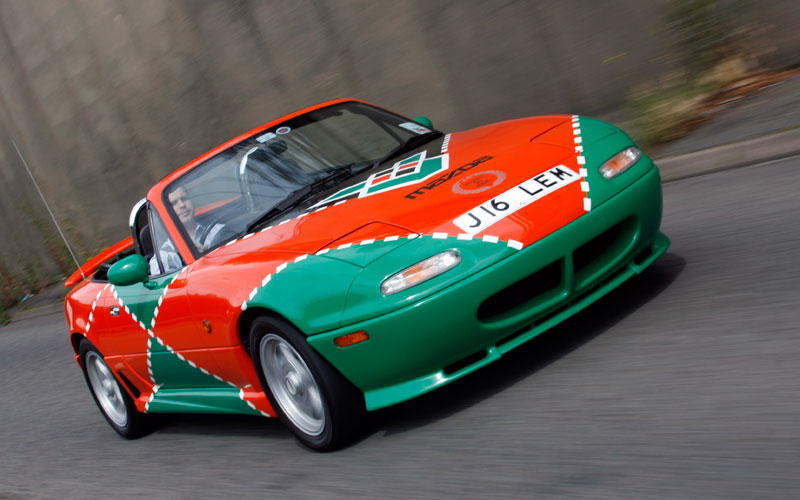 After selling over 400,000 units from 1989 to 1997, the MK1 was phased out whilst Mazda readied the second generation, building on the MK1’s popular characteristics of performance, agility and safety.

The next edition was the MX-5 MK2 which was released in 1998 and represented a continuation of the MK1, except this model was designed with a more modern curved appearance. The added reassurance of airbags and ABS brakes updated the safety features of this model, whilst added weight but increased aerodynamics made the MK2 just as fun to drive as the original despite modern touches. Here the milestones were truly reached, with total production reaching 500,000 units in 1999, smashing the Guinness World Record of being the bestselling two-seater sports car in the world, ever. Now 10 years old, the anniversary model came with a leather steering wheel, BOSE audio system and a higher top speed of 133mph.

By 2001, Mazda had broken its own production record again, clocking up 600,000 models to roll off the production line, and had also introduced a facelift. Adding foglamps and improving seats to increase everyday appeal, and white and red instrument panel gauges to increase design appeal, refined the car even further. By 2004, production had reached 700,000 and Mazda had launched the official turbocharged Mazdaspeed Mx-5 Roadster Turbo. With 180 bhp from the engine and a 0-60 time of just 6.2 seconds, combined with special metallic colours such as Lava Orange and Velocity Red, this car was quick and versatile, even making it to rally racing against purpose built Japanese competitors. 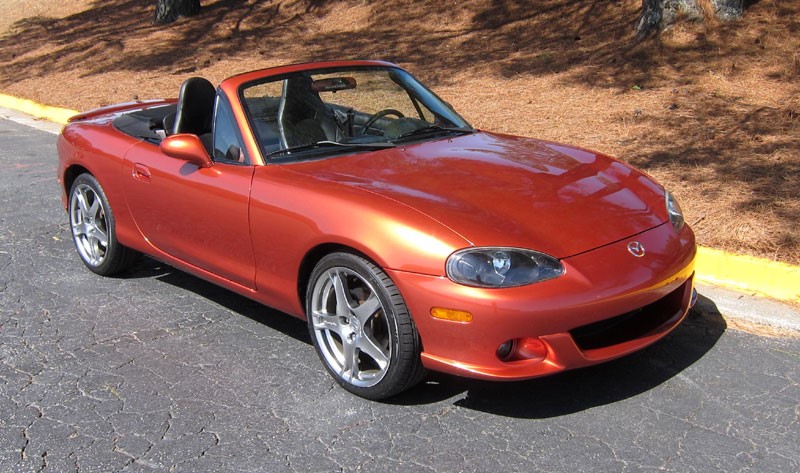 The MX-5 was improved further still by the launch of the 2006 MK3, using completely new components to refine the drivability. Traction control and stability control technology developed high speed handling further and the Mazda fanbase and general public went wild for the added chrome accents and special wheels on the 3rd Generation Limited launch model. Ready for summer, the July 2006 coupé convertible edition was released, with a powered 36kg hardtop made of polycarbonate that took 12 seconds to raise or lower. This rapid powered roof set the record for the World’s fastest retractable hard top, and also places the MX-5 4th in the list of fastest convertible roofs overall, with no need to make changes to luggage covers or other manual steps required for other cabriolets and coupés. The MK3 had a 1.8L or 2.0L engine and choice of gearboxes, with the highest edition able to achieve 134mph and 0-60 in 6.5 seconds. During this generation Mazda broke the 800,000 total unit milestone in 2007, and reached 900,000 in 2011.

A number of Mazda designed and external corporation designed concepts were released during the MK3’s reign, including the MX-5 Super20, famous for its Hyper Orange body, gloss black hardtop, racing wheels, and specialist sports brakes, exhaust, clutch and other components.

Other famous moments occurred in 2013, with the MAX-5 event on June 15th in the Netherlands breaking another Guinness World Record. This time the record has for the largest parade of Mazda cars, with 683 MX-5s, from the original concepts to the newest 203bhp Jota 2.0i, setting the record by parading around a 15km route in Lelystad. 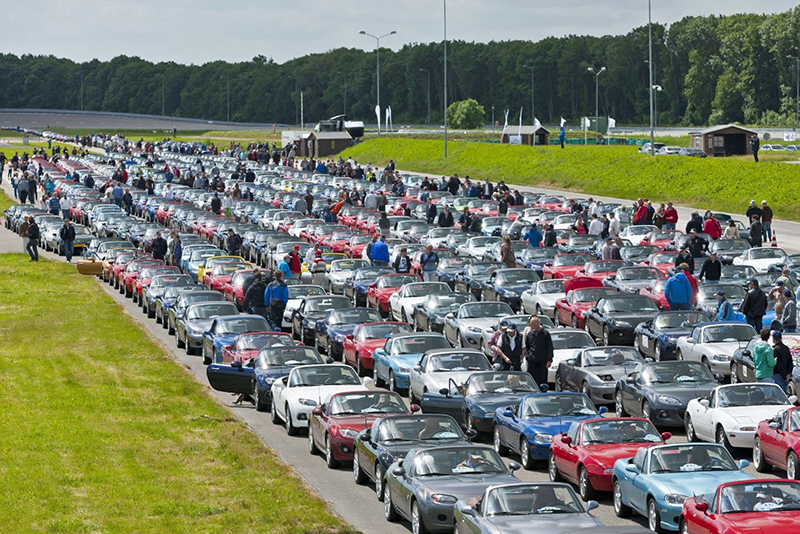 The year after, 2014, saw the launch of the 25th Anniversary Special edition, a striking car finished in zeal red and with 18” gunmetal alloys.  Only 1000 were produced worldwide, with 750 designed for the MX-5s largest global market, the UK. Days before the launch, T W White & Sons celebrated our 15,000 MX-5 sale (both new and used sales), making us one of the largest retailers of the MX-5 in the World.

Later that year, we saw the all-new MX-5 that we know and love today presented at the Paris Motor Show in October, followed by Los Angeles in November. Despite only being around for a short while, it has already received a number of awards and nominations, including the Auto Express New Car Award for Best Roadster in 2015, World Car of the Year, World Design Car of the Year, Yahoo Autos 2016 Fresh Ride of the Year and Roadshow by CNET Editor’s Choice Best Convertibles 2016. Production began a year ago on 4th March 2015 and the 1 millionth MX-5 will shortly be rolling off the line, accompanied by huge fanfare and enthusiasm from the press and public alike. 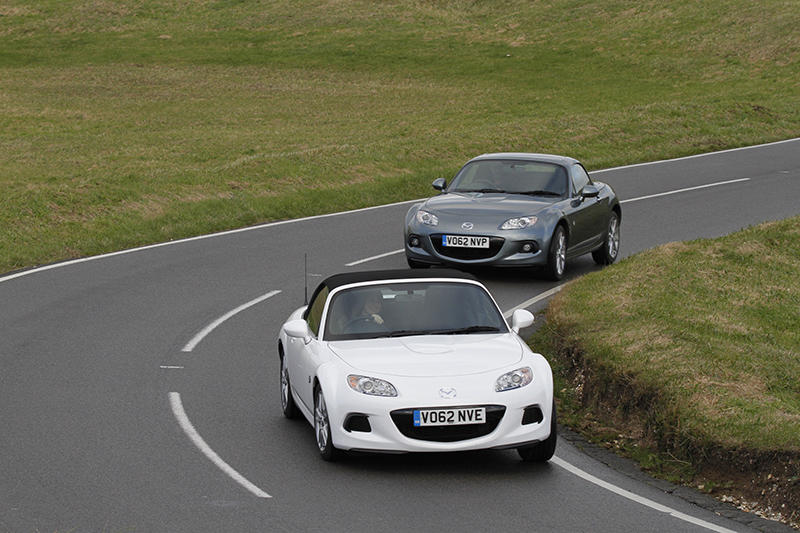 Launched in early 2015 was the MX-5 MK4, with SKYACTIV technology, which is simply stunning. Made from lightweight materials and smaller mechanical components, the MK4 offers a choice of 1.5 or 2.0 engines with manual or transmission. In the UK only Manual MK4s are currently available, however T W White and Sons will be exclusively importing an automatic version before general release, so keep checking the blog for an announcement soon. 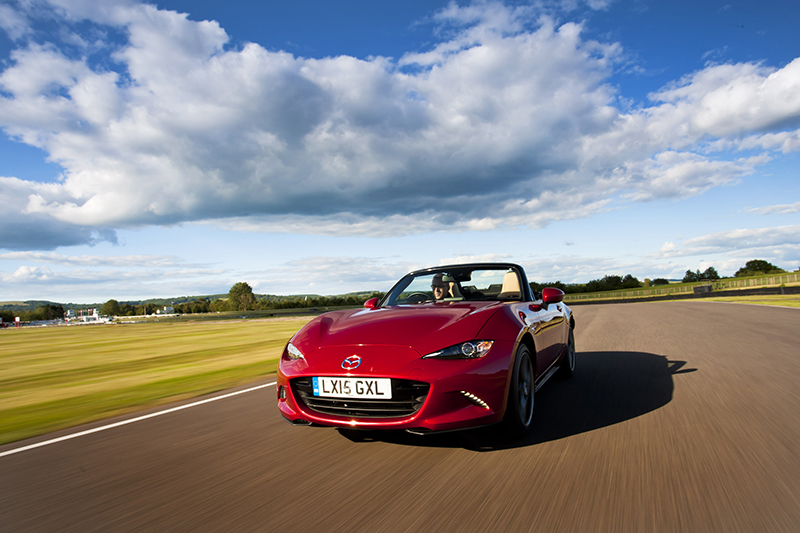 After the ten year reign of the MK3 MX-5, the New Mazda MX-5 MK4 has finally become available in the UK. For such an iconic car, this car offers some incredibly modern and forward looking features in the form of SKYACTIV technology. This technology incorporates new engines and gear boxes alongside body and chassis updates to improve efficiency, power and aerodynamic prowess to create the best performing MX-5 of all time. A second philosophy, the KODO: Soul of Motion design theme gives the MK4 an exciting, aesthetically pleasing and sophisticated look which appeals to a broad range of drivers looking for an affordable thrill. The newest generation also includes the latest in-car technology such as state of the art communication, navigation and connectivity features, an engine STOP/START button and keyless entry.

In legendary MX-5 fashion, the MK4 MX-5 was the first car to be crowned both World Car of the Year and World Car Design of the Year 2016 at the New York International Auto Show. In all the history of the awards, no car has won two categories before, emphasising how stunning this record breaking car really is!

The 1050 kg 1.5L engine model is capable of 0-62mph in 8.3 seconds, with CO2 emissions of 139g/km and a top speed of 127mph. The 2.0L model knocks a whole second off the 0-62mph sprint time, taking it to 7.3 seconds, while top speed jumps 6mph to 133mph. The new 2.0 litre engine really shows when coming out of slower bends and bringing you up to speed with greater ease thanks to the wider torque band. In fact, the MX-5 2.0 runs so smoothly that even driving at slow speeds feels fantastic. At high speeds the outstanding agility and driving dynamics combined with thrilling rear wheel drive makes the MX-5 MK4 perfect for a day on the track or a drive around the Surrey Hills or Kent countryside.

The MK4 also features a front anti-roll bar designed to sharpen steering, along with a limited slip differential for tighter cornering, to enhance precision in your driving. The low slung driving position makes for an enjoyable drive and comfortable seating positions for both the driver and passenger.

And if you were disappointed when the MK4 came out in soft top only, we’re sure you will share with us the excitement at the unveiling of the MX-5 RF (“retractable fastback”) at the premier of this years New York Motor Show. Offering the legendary sports car with a whole new dimension – a Targa top.

If you want to see and experience for yourself how the newest Mazda model performs why not book a test drive with one of our experts!