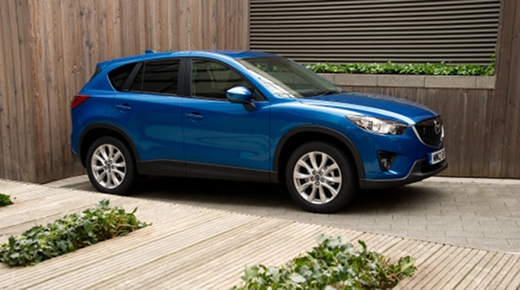 The Mazda CX5 has picked up yet another award, adding to its already lengthy list of accolades – the Japanese crossover was voted the top SUV in the recent What Car? green car awards.

The specific Mazda CX5 celebrated was the 150hp 2.2-litre Skyactiv-D turbodiesel model, which under What Car?’s true mpg tests recorded 47.2mpg – significantly better than its rivals, in the form of the Audi Q3 and the Land Rover Freelander.

Official emissions of just 119g/km CO2 means you’ll pay just £30 annual road tax, and for company car users among you, the story is equally as appealing.

If you’re a 40% taxpayer you’ll only pay £142 per month in company car tax – a snip compared to the similarly powerful but more polluting Audi Q3 and Land Rover Freelander at 137g/km and 158g/km CO2 respectively.

The Mazda CX5 has proved it combines engineering excellence with its success in the What Car? green car awards and stunning design – just last month it won the best design award in its sector, as chosen by 200,000 readers of Auto Bild car magazine across 15 European countries.

The Mazda CX5 began to scoop gongs immediately from its launch and was crowned Best Crossover at the 2012 Auto Express New Car Awards earlier in the year, praised for its “space, quality and style with a great drive and incredible efficiency.”

Priced from just £21,395 it represents excellent value too. A range of diesel engines – including this award-winning 150hp 2.2-litre turbodiesel and a more powerful 175hp 2.2 diesel – as well as a 165hp 2.0-litre petrol mean there is an option for every customer.

Alongside the Mazda CX5’s class-leading efficiency, performance is also strong – a range-best 0-62mph time of 8.8 seconds from the most powerful diesel is incredibly impressive.

For more information on the innovative Mazda CX5 crossover, why not drop into one of our dedicated Mazda showrooms in Bookham, Surrey or Orpington, Kent.