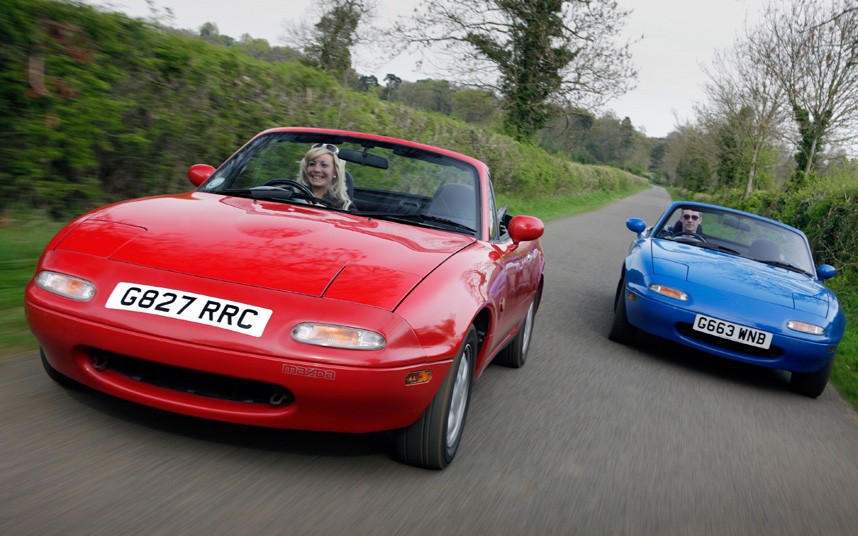 It’s hard to believe the Mazda MX5 is 25 years old this year, such is the car’s fresh-faced appeal, proving how relevant the original concept was all those years ago.

The original Mazda MX5 debuted at the 1989 Chicago Auto Show, taking the world by storm. Here was a small, two-seat, lightweight sports car with a modest output in the age of monstrous turbocharged performance cars.

It was clear Mazda was placing the focus well and truly upon driving dynamics.

Inspired by classic British and Italian roadsters, like the Lotus Elan and Alfa Romeo Spider respectively, the Mazda MX5 began by using a 115hp 1.6-litre engine. In a car that weighed under a tonne, this was enough to sprint from 0-62mph in a more than respectable 8.1 seconds.

Later came a bigger 1.8-litre engine making 131hp, for those after a bit more power, while the was detuned to 89hp for people wanting more of a low cost option.

Whichever engine sat in the Mazda MX5’s nose, however, the way the car drove was the same. Effortless agility, plenty of grip and beautiful steering and balance secured its popularity for the next 25 years.

Known as the Eunos Roadster in Japan and the Miata in the US, (it did get the MX5 nameplate in the UK and Europe), whatever the car was called, it was loved by so many across the globe. 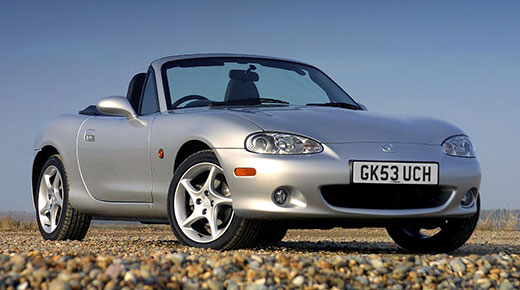 By February 1998, despite the MX5’s cult following, the car was due an update. Out went the pop-up headlights on safety grounds and in came a new faired-in set, giving a more modern look at the time.

The 1.6-litre unit remained, now producing 108hp, but a new 140hp 1.8 made an appearance, too. The mk2 Mazda MX5 stuck resolutely to the lightweight philosophy, and with the addition of a bit more power, improved performance.

The 1.8 now took 7.8 seconds to sprint from 0-62mph, meaning it was as quick as any turbocharged hot hatchbacks.

Even more so following a facelift in 2001. Power was increased again to 152hp for the 1.8. The MX5 lived on in mk2 form for another four years before finally being replaced in 2005. 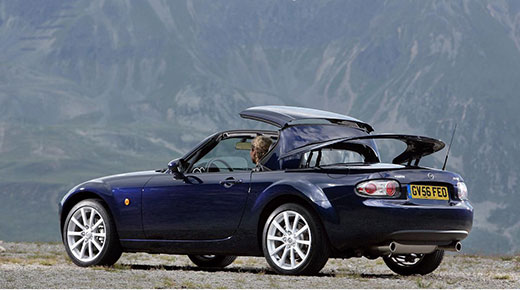 The third generation Mazda MX5 was big leap in terms of design. Even more refined and upmarket, this modern looking roadster was now a match for cars like the BMW Z4 and Mercedes-Benz SLK.

But it still retained that go-kart like feel to drive.

For the first time traction control was now fitted as was the option of a folding metal roof – although the traditional soft-top was still available, too.

The engine offerings now changed to a 1.8-litre unit, while the top of the range model now used a 2.0-litre engine.

Some said the mk3 was now too heavy and too far from the original MX5 concept, but just one drive proved they were wrong.

In 2008 the car was facelifted with the 1.8 now producing 126hp while the 2.0-litre kicked out 160hp. The manual gearbox was also tweaked to offer the same levels of involvement, but a smoother shift action. 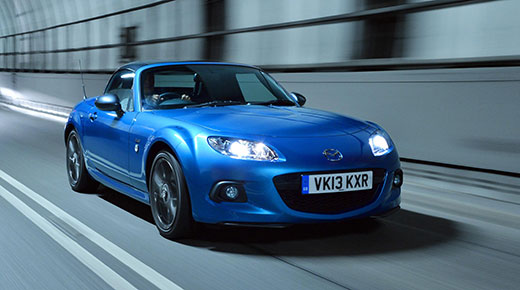 The Mazda MX5 is now a quarter of a century old, but next year we’ll see an all-new fourth-generation model.

Developed in conjunction with Alfa Romeo, this new car will use its own range of engines featuring plenty of efficiency and performance-focused Skyactiv technology in the powertrain and the chassis.

We can’t wait to see what it looks like and how it drives, but in the meantime, to mark the MX5’s rather special birthday, we’ll be bringing you some amazing offers on the current car, so keep a look out.