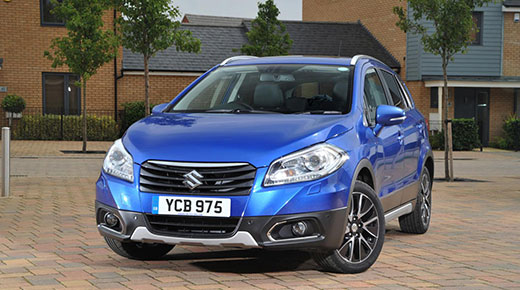 The new Suzuki SX4 S-Cross has been designed to bridge the market gap between a family hatchback and the more traditional 4×4.  It takes Suzuki into an area of the car market it has never competed in before, with the Suzuki SX4 S-Cross set to take the crossover class by storm.

The line-up is straightforward. There are four trim levels: entry SZ3, including alloy wheels and air conditioning; smart SZ4, which, with its enhanced exterior styling is likely to be the best-selling; business-orientated SZT, with sat-nav, Bluetooth and reversing camera; and range-topping SZ5, which features an enormous panoramic sunroof and leather upholstery.

Every version is available with a 120hp 1.6-litre petrol, while the SZT and SZ5 variants are also offered with a 120hp 1.6-litre turbodiesel. Both engines offer class-leading levels of efficiency. In fact, every version is at least one tax band lower than the nearest competitor, with the diesel emitting as little as 110g/km CO2 – meaning £35 annual car tax – and returning over 67mpg.

There’s also a choice of both front- and four-wheel drive – the latter a new ‘intelligent’ system with four switchable driving modes, drawing upon Suzuki’s extensive 4×4 expertise. A manual gearbox comes as standard, but the petrol is also offered with an optional CVT automatic.

In addition to being well-made and versatile the Suzuki Sx4 S-Cross offers a large amount of boot space and there’s plenty of passenger legroom front and rear . The S-Cross engines are willing, and the chassis responds keenly to spirited cornering while proving both stable at motorway speeds and impressively supple over bumpy town centre surfaces, creating a fun to drive experience.

There’s even enough ground clearance for some light off-roading, and the four-wheel drive lock mode will certainly get you out of trouble in a muddy field. The Sport setting improves on-road handling, and there’s even a mode specifically for snow. Auto takes care of you the rest of the time.

Overall the new Suzuki SX4 S-Cross has a real go-anywhere, do-anything feel – making it an ideal choice if you’ve got an action packed lifestyle or simply want to get the kids to school in comfortable crossover style.